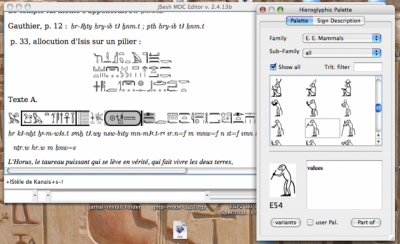 JSesh is a word processor, for ancient Egyptian hieroglyphic texts. It's
used in many professional egyptological publications: the IFAO, the JARCE, and all kinds of books.

If you use JSesh in a scientific work, you can reference it the following way :

It might be important to be able to compare signs from a JSesh version to another. Starting with JSesh 7.5.5, I have decided to publish a pdf document to that purpose. The document can be found on Zenodo at

It's a plain list, without any comment ; the sole purpose is to display the way a certain...

I have the pleasure to announce that Dr. Masakatsu Nagai from The University of Tokyo has recently created two documentations for JSesh in Japanese : one for beginners, and an intermediate-level documentation.

Thanks a lot for this documentation work !

A small problem with new versions of Inkscape

The size of signs made with the latest versions of Inkscape might appear too small. See this bug report for how to solve the problem.