I'm currently having discussions about a cleanup of the fonts, and the question of L16 has (re)appeared.

Back in 2008-2009, when M. Thomas developped most of the JSesh fonts, we had a lot of discussions about the Manuel de Codage and the like. Comparing the 1988 MdC with the Winglyph fonts, I wondered a lot about the way L16 looked in both of them.

Basically, the Manuel de Codage has this:

Whereas the sign has the following appearance in Hieroglyphica: 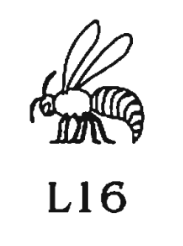 So, I tried to track the origin of the sign.

The problem in those cases is

The hieroglyphica don't contain enough information for this, but the original Manuel de Codage has indirect clues about the signs origin. First it says the sign represents a wasp. Then, the sign is hand-drawn, which usually means it comes from the Worterbuch Zettel.

Hence, I typed "wasp" in the Thesaurus Linguae Aegyptiae, in order to locate the corresponding words and sources for them. For L16, the only source I found was the word tkk.t, in the pyramid texts (Spruch 627, § 1772, only in Neferkare Pepi (II)).

Now I've found some sources in Recueil de Travaux 12, p. 13. The only problem is that I don't find a real facsimile (I'd gladly have a good photo, too).

As you see, the drawing is sketchy.

the determinative seems to represent some kind of mole cricket, usual in Egypt. V31:V31-X1 would mean "mole cricket", and this meaning would fit the texts where the scribe tells of the peasant's misfortunes and says that his corn is eaten by X1:G1-V31:G1-D28:Z1-X1:I14, the mole-cricket.

Jéquier has also published the monument, but he decided to concentrate on the part which where previously unpublished, so he is not very helpful here.

In Sethe's edition, the rendition is:

Since 2008, D. Meeks has published a very thourough study on the hieroglyphs representing insects.

His remarks are quite important in the present context.

First, about bees and wasp, and especially the L2 L2 glyph. L2 is an hybrid ; it has got features from various insects - indeed it looks more like a wasp or a hornet than like a bee. However, its usual meaning is bee, and it's used to display bees in iconography ; for instance, in TT279 (tomb of Pabasa).

'Although the sign is the ideogram for ‘bee,’ the form and colour-markings are more those of a wasp or hornet as represented by the Egyptians and the hieroglyph corresponds closely to the common Egyptian hornet in nature'

The problem I have with the Hieroglyphica shape of L16 is the following: I don't know whence the sign comes, and I'm afraid that some users might use it instead of L2. Obviously, if the way in which it differs of L2 was very well documented, it would not be problematic. But, knowing my users, I fear that L16 might be used, for, well, some weird-looking instances of L2, even if they are not good match for L16.